Saturday I took my daughter to her first real engineering conference for kids, Lego Fest. We bought our tickets over a month ago and the event was now sold out. The night before the fest my “mini me” hopped into bed at 7 o’clock and said “I want to go to sleep so tomorrow will come quickly and we can go to Lego Fest!” Her expression and exuberance was contagious, I was excited too! The next day we took the hour long drive to the San Jose Convention Center. Upon entering the conference hall we were met with a quarter-mile long line of impatient parents and kids. The 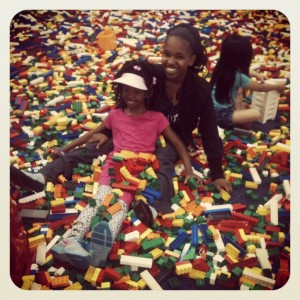 kids were mostly boys, maybe 10% girls. The families were mostly white. I saw one interracial family in the entire line. But this isn’t about race or gender, it’s about my little girls first experience in a Tech Conference.

Safety Rating: 5 out of 5
The first impression I received was the great effort the conference organizers put into child safety. There were reminders setup for families to set meeting places in case they get lost, and there was a booth setup to register your kids and provide parental contacts in case your kid shows up lost during the conference. Very helpful as I counted at least 30 calls over the announcement system for parents to come pick up their lost children. Hey, it’s Lego Fest, people get excited and lose their kids! It basically felt like the kids version of SXSW with Legos. I *wish* SXSW had Legos.
Fun Rating: 4 out of 5
Anyway the activities were a blast! We attended the Master Builder Academy session where one of the 7 Master Builders from around the world gave a workshop on how the Master Builders construct life sized characters like Darth Vador, Batman, Toy Story 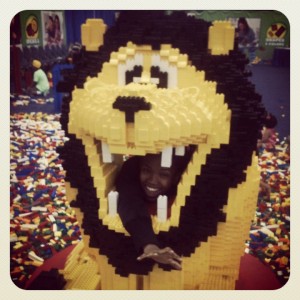 characters etc that were on display during the festival. The kids were incredibly curious about this profession of “Master Builders” watching on with wide eyes and very few seemed to lose interest or leave the sold out session. After the workshop the children raced to the bins to build adhoc robots, space crafts, cars, insects and all manner of creations.
Further in the conference hall there was an Art Gallery where families were making Lego art and putting it on display. There were games, building races, and robots sponsored by Play-well Teknologies. Play-well by far had the best group of staff managing their booth as they knew how to engage the kids, keep their attention and establish order to keep the line moving. It was so well organized that it has me considering enrollment into one of their classes for my young one.
Diversity Rating: 3 out of 5
The last area we checked out was the Lego Friends section that I call barbie style legos. 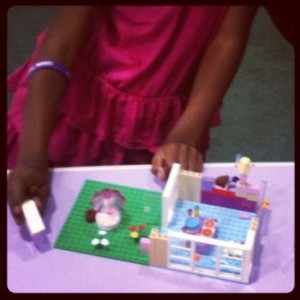 This area was decked out in pink and there was ZERO ethnic diversity in any of the marketing. Also no boys included in the Lego Friends marketing or play set. I guess boys can’t be friends? Whatever. Of course this made me wonder what would happen if girls were featured in marketing for regular legos. Would the marketing alone change the social stigma that legos are boy toys? Later on I was even more disappointed when I went to the Lego website and was met with a video ad for lego friends that didn’t include any ethnicity other than white girls singing, dancing and being friends. I guess there are no friends of African or Asian descent? Check out the video: http://www.lego.com/en-us/videos?video={42804DA9-1B6A-4C08-9969-016C3373ADDD}&category=all&theme=friends . This made me think that the long held stance that lego’s “yellow” people did not reflect any particular race doesn’t reflect across the children which they include in their marketing collateral. There is zero diversity in the marketing. At least they finally introduced a woman scientist minifigure.
Educational Value: 5 out of 5
There is still no denying the value that Lego’s provide to the creative thinking and problem solving capabilities of a child. A day dedicated to building with legos left my child building more creative things for hours on end, racing to use the instructions herself, and racing back to show me what she’d built for the very important parental nod & “oooh!” of approval. I always put emphasis on the “ooh”ing when she veers away from the designs to make her own creations. Despite my criticism I encourage parents to play Legos with their children and use it as a stepping stone to robotics as well. The one activity that we didn’t get to enjoy at Lego Fest was the robotics section because the line took over an hour just to get through. The cool thing about their robotics programs is that there are international competitions all the way up to high school. So no, Lego’s aren’t just for kids.
Girls and Minorities an Uber Minority in Youth STEM Pipeline
All in all the experience was fun, exciting, and a noteworthy first engineering conference for my 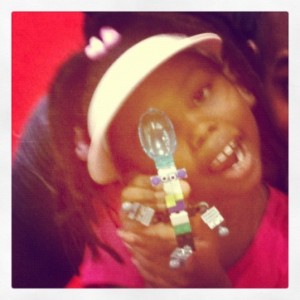 girl yet a healthy reminder that the issue of lacking diversity in engineering professions is more than just a pipeline issue. Lack of diversity in tech and engineering is pervasive across every generation and even more extreme at the younger ages. This is why programs like Black Girls Code MUST exist and be given even more support. I wonder if my daughter was the only African American girl in the entire event? (If any other parents sharing my plight attended please leave a comment for me to contact you.) Luckily she’s still too young to realize that she’s one of 10 African Americans out of hundreds of children, or that the girls had all been ushered to the “pink play pen” to play with a non-ethnically diverse set of dolls. If she were old enough to notice these things it would have been a problem because I’m just not prepared to explain to her why the best events with the most innovative toys are homogeneous. Here’s to hoping that something will change before she starts to notice the divide and that the divide itself will not negatively affect her.
Did you like this? Share it:
Tweet