Let me be sure to tell you that I am writing this blog from the paradisiacal setting of The Dead Sea in Jordan. It feels like a reward on top of the reward I feel in my heart due to the volunteer work I’ve been graced to share with the rest of the TechWomen and Jordanian community since Monday. 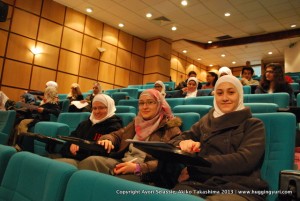 Today was especially delightful as the full day was set aside for the TechWomen Networking Conference presented at Princess Sumaya University for Technology. Her Royal Highness was in attendance of the conference which showed her great support for young women to pursue STEM & ICT. I’m sure the young girls attending were delighted to be there and know how much their Princess supports their efforts to study hard and become innovators.

The conference featured sessions facilitated by TechWomen Mentors and Emerging Leaders from the 2011 and 2012 season. Session topics ranged from Entrepreneurship, to How to Land a Software Engineer Job, to Faith and Technology and featured speeches delivered by Deputy Secretary of State Lee Satterfield, of US Department of State and Her Royal Highness Princess Sumaya herself. 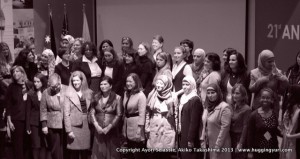 Satterfield’s address highlighted TechWomen as a critical program because people to people relationships form the foundation for more productive global relationships. Princess Sumaya remarked that TechWomen represent smart power and took pause to recognize the young students in the room. I imaged what it must feel like to be one of these young girls and have your nation’s Princess show pride in you. I look at the young girls attending the conference as the future leaders of a more brave and better world. Their experience is vastly different from my experience growing up as a young woman in tech precisely due to the efforts of advocates and sponsors like Former Secretary of State Hillary Rodham Clinton 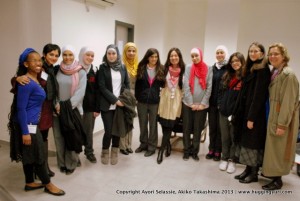 I heard positive things from the girls about all the sessions. I was honored to facilitate one of the final breakout sessions on the topic of Faith and Technology along with Akiko K. Takashima, Amy Miller, Maryann Hrichak, Ramziyeh Jaayssa, and Neeti Gowda. The session had the best attendance of all breakout sessions and the participation from the girls showed this was a topic that was important to them and they were fully engaged. This session was very personal and interactive with discussion ranging from faith to family, technology, innovation, and the pros and cons of technology. The closing remarks of the session tied faith to ones own destiny in life and technology as a part of delivering that destiny. Martin Luther King Jr. said “faith is taking the first step even when you don’t see the whole staircase”, tying the very act of innovation to faith. One of the young girls bravely stood before everyone in the auditorium as the final speaker to deliver personal testimony that the conference and discussions on Faith and Technology was “just what I needed” with a great beaming smile. I felt the same way.

Before I return to enjoying the amazing attraction of the Dead Sea I want to give a shot out to Heather Ramsey, Arezoo Miot and Lexi Curtice for arranging all these incredible visits. Kudos to Sheila Casey and Lee Satterfield for supporting cultural exchanges that change lives. This was an experience of a lifetime!

Did you like this? Share it:
Tweet
conference Diplomacy Jordan networking salesforce.com TechGirls technology TechWomen U.S. Dept of State WIT Women in Tech women in technology