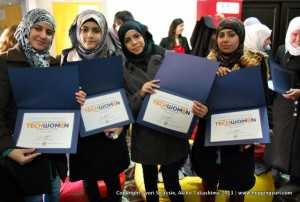 I’ve had several people ask me what I am doing on this trip to Jordan and why is being a “TechWoman” significant. This post will answer that question in detail. Today (Wednesday Feb 6th) was the 3rd day of our activities in Jordan and the most inspirational yet with the majority of the day dedicated to meeting with young girls of the region. We started at Injaz which is an organization which offers several programs aiming to inspire the youth motivating them to aim high through exposing them to successful role models in society. The young girls at Injaz demonstrated a tool developed by Injaz to teach business management skills through simulation in an educational game. The program offered the girls opportunity to build their companies as a part of a team and compete against other teams. This simulation was a pleasure to watch but even more inspirational were the young girls testimonies which highlighted all the young girls to be incredibly gifted leaders who are confident, articulate, and highly intelligent.

Check out some of the video Jill Wetzler captured and shared via twitter as well as some advice offered by Hwayda Hemaid to the girls:

It is not enough to say that advocating for girls and women in STEM and ICT is something to be passionate about, you really have to get out there, interact and feel it in your soul. Amy Miller brought tears to the eyes of many with her heartfelt accolades to the girls remarking on their confidence, talent, and leadership capabilities. The general consensus in the room was that Injaz is the type of program that needs to be modeled everywhere. They have illustrated some truly remarkable success that was definately worthy of the plaque and certificates of recognition presented to them by Lee Satterfield. It was a perfect way to start the morning in Jordan and it made peeling the TechWomen away from Injaz quite difficult.

Lee Satterfield from @statedept presenting @techwomen plaque to leaders of @injazorg for their contributions #twjo twitter.com/iayori/status/…

The next stop was at the Jubilee School where I had an opportunity to chat with some of their students over lunch and then receive a tour of their acclaimed institution. We jotted from lab to lab to watch presentations from the student body on robotics, chemistry, visual arts and other research projects developed by the students often in partnership with Universities, illustrating the truly advanced and gifted nature of these students. I had an opportunity to review and sit with Asoool, a student who showed me the projects she created in 3DStudio Max. Her aptitude compelled me to share some of the applications that I use (that are also free to develop 3D games and environments) such as Unity and Google Sketchup. Her curiosity reminded me of my own and I had to smile as I responded to her questions. 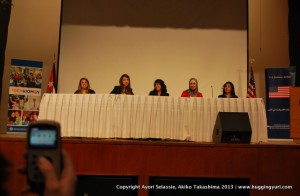 I also felt a beam of pride to watch my salesforce.com co-worker Jill Wetzler share her technical journey of becoming a Development Manager on a panel session delivered to the students. Jill presented along with other TechWomen, Maha Akkari, Lisa Ramirez, Diala Alkhawaldeh, and Zeina Hobaika. As a matter of fact, during this past trip I’d found a new mentor of my own in Lisa Ramirez of Juniper Networks. Here is a brief sample of some of the advice Lisa shared with the girls of Jubilee, “spread your arms when you sit at the table so that you take up space and raise your seat up so that you don’t minimize your appearance”. 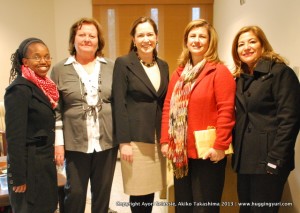 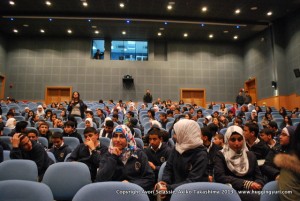 During the panel discussion Asool and I discussed the varying personalities of the Tech Women on stage and their impressive areas of expertise. I shared what inspired me most about the women; Zeina, the Emerging Leader who’s swagger was matched by her intelligence (she’s a doctor and HIV researcher), to Diala who’s calm, patient and humble spirit made her the admiration of many members of the delegation. I realized that these women presenting on stage were far more than just stories, they were prototypes and models for all the young women in the room. Their offers to share their contact information and be a resource to the girls was more precious than gold. I have no doubt that many of the young women of Jubilee will take advantage of the offer.

The third and final stop of the day was a visit to OASIS500, a startup accelerator and training program. During the session Emile Cubeisy shared some interesting information on Oasis500 including the fact that the managing team has a really nice gender balance which contributes to higher enrollment of women entrepreneurs to their training program and the 40% of acceleration companies being being women owned. 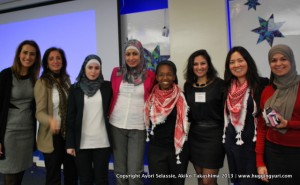 Some of those women in the accelerator pitched their companies to us which included Aqar-Estate, ArabiaWeddings.com, First Bazaar, Maktabee, Gallary Alsharq, and Abjjad. Two delegation members even pitched their ideas during the session. Kudos to Lina Akiki, and Diala Alkhawaldeh and congratulations to all the women for pursuing and sharing their dreams!

It seems incredulous for me as I document the things which have happened on this delegation trip but the motivation I feel to continue advocating for this cause keeps me from shutting my mouth! That being said, the previous day (Tuesday) was also a great treat that I’d like to highlight. We visited the Jordan University of Science and Technology to encourage the women there to apply to be Emerging Leaders. All the TechWomen who spoke up at the event had inspiring things to say but I want to highlight two in particular, Dareen Alhiyari and Kinh DeMaree who offered such practical and inspiring advice to the women in the room. Dareen, being a native Jordanian was able to engage with the women in arabic and speak from the perspective of how to advocate for yourself to your home and family on why it’s worth it for you to apply to a program which will take you away from home for 5 weeks. She told them how to explain the importance of the value in gaining a new global family. Kinh shared her experiences of going through the Facebook IPO, recruiting in top Silicon Valley companies, tips on how to build a strong resume which will get you noticed, and her experience being with Geeks on a Plane. Their words will certainly increase the number of Jordanian women applying to the program and potentially other programs as well.

After the University we all hopped onto the bus for a nearly 3 hour ride to Ingrid and the village of Kouhra. Many of us fell asleep during the ride and woke up to a scene likening something from the classic film, The South of Music. This photo doesn’t do the lush green landscape justice. Nor do they give justice to the delicious home cooked meals provided by the women from the village (see gallery below). I digress, I’m not really here to talk about the food and landscape, I want to say something about how inspiring the women in this village were. 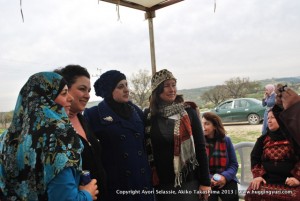 One of the women in particular (pictured in the blue jacket) did something amazing for this small community. She went away to learn about e-commerce with another IIE program and upon returning to her village she took it upon herself and taught all the other women how to sell their authentic handmade crafts online, creating new streams of income for this rural community and delivering a greater sense of independence to the women there. 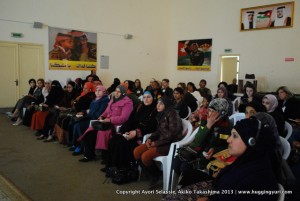 Cultural differences aside, the American dream is independence and the women in Jordan seem to overcome incredible odds to go after their own dreams. What can you do other than support them? Well support them TechWomen did! As a matter of fact Katy Dickinson organized an e-commerce workshop for the village and delivered a wealth of information along with Jeannice Fairrer Samani, Dareen Alhiyari, Huda Al-wahidi/Isbaitan and Shoruq Morakten. Great job ladies! 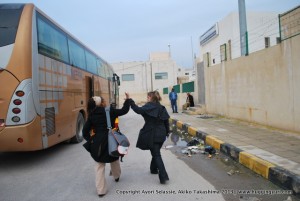 I am so motivated by the ever incomplete job that is before us in terms of supporting underserved communities, gender equality and leadership development. The camaraderie I feel on this Delegation trip can’t be summed up in words, but maybe, just maybe it was captured in this photo with Jill. In a few hours I will be joining the rest of the TechWomen to complete our final day of volunteer work here in Jordan and if Thursday will be anything like Wednesday I just know that I will be truly blown away, inspired, motivated and… well, FIRED UP! AND READY TO GO!